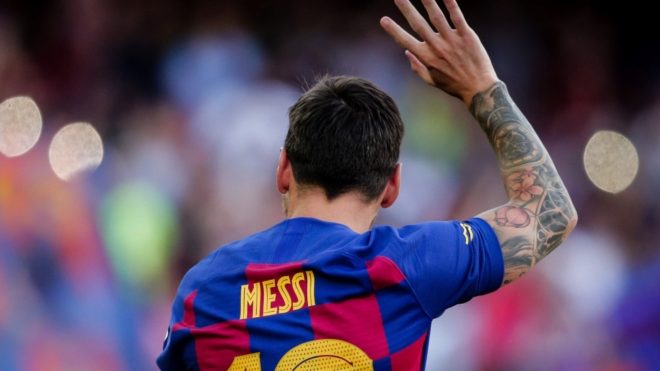 On Tuesday afternoon the global soccer world was sent into shockwaves when reports broke that Lionel Messi had informed FC Barcelona that he intends to opt out of his contract and leave the club. The club has since confirmed that they did receive the request, which was sent via burofax.
Which begs the question: What on Earth is a burofax?
Well, it’s a method of business communication, popular in Spain, that allows people to send a secure document that will be recognised in a court or by a third party. I think we would call it a registered delivery in the UK.
Now he’s expressed a desire to leave who will be able to afford him? Apparently he currently earns £51,376.000 basic yearly wages (£988.000 a week), £9.100.000 per year on image rights, £13.000.000 a year on possible bonuses(goals,assists,trophies) plus signing on & loyalty fee (£120.000.000 over 5 years). Nice work if you can get it! You’d have to say Manchester City, who have an advantage with Guardiola in charge. The other team would be losing Champions League Finalists Paris Saint Germain. What a front 3 that would be, Messi, Mbappe and Neymar. It would be great to see him in the Premier League, I’ve been lucky enough or unlucky in most cases to see him play. I’ve seen him destroy my teams Arsenal and Real Mallorca on numerous occasions. Let’s see I’m sure there’s lots of twists and turns to come.
It’s been just over a year, but finally the 20 teams have been decided for the 2020/21 La Liga season. Elche were the final team to go up after they beat Girona by 1-0 in the play-offs. Elche like Mallorca before them have managed 2 promotions in the last 2 seasons via the play-offs. To top it all off and to show you how mad Spanish football is Jose Rojo “Pacheta” their coach has now left the club!
Looking at it from a Real Mallorca point of view, of the 3 teams that got relegated in the 2018/19 season. Girona finished 5th and as you’ve seen lost in the play-off final. Huesca finished 1st and went straight back up and Rayo Vallecano finished 7th just outside the play-offs.
So as long as they get off to a good start, they have every chance of going straight back up. In fact the three teams that have gone down will be the favourites to go back up. Espanyol’s squad value far outweighs the rest of the league at just over £100 million compared to Mallorca in second place at just over £40 million.
They have arrived in Murcia to carry on their pre-season training and to play 3 games against Levante tomorrow, Tenerife on the 29th and Castellón on the 1st. The new coach has taken a squad of 28 with all the usual faces of last year and good to see the youngsters Luka Romero and Rafael Obrador included. In fact if they can keep that team together it does look good on paper. Centre back Martin Valjent has been selected in the Slovakia squad to play the Czech Republic and Israel in the week leading up to Mallorca’s opening game of the season.
They are up to 10,132 season ticket holders that have renewed their tickets. From today season ticket holders have the opportunity to change to seats that haven’t been renewed and from September 1st they are taking new applications.
Atlético Baleares started their pre-season on Monday with all the squad going through fitness and Covid checks. An important signing for them this week is left winger Dani Pichin, who’s played more than 200 games in Segunda B helping Ponferradina and Rayo Majadahonda to promotion.
UD Ibiza released their new kit this week. They are normally in sky blue like Manchester City but I detect a slightly darker blue this season. New signings this week are centre forward Ekain and Manu Molina an attacking midfielder.
UD Poblense are working hard on retaining as many of their players from last season as possible. Coach Oscar Troya said on Spanish radio this week “the first objective of the season is to win our first game.”
Two former players from the CD San Francisco Division Honor 2017/18 team have just won UEFA Youth League playing for Real Madrid. Xavi Sintes from Menorca and Pablo Ramon from Calvia, Mallorca who played previously for Son Caliu, both played in the team that beat Benfica 3-2. They are currently being managed by former legendary player Raul. It shows that with hard work and dedication players from the islands can achieve great things.
Episode 5 of A Kick in The Balearics will be out today on you tube and on podcast on Friday. We have just launched on Spotify and are awaiting confirmation on Apple iTunes and on all smart speakers through the Tunein radio App. If you have any interesting stories on your local Balearic club then please get in touch and follow us on all social media.
Take care everyone, I’m back at the Weekend.
Richie presents the Radio One Mallorca Breakfast show Monday to Friday07.30-11.00am on 93.8fm in Mallorca and 102fm in Calvià, online atwww.radioonemallorca.com on mobile through their free App for IPhone & Android, The Tunein Radio App, iTunes, the Spanish TDT TV service and all smart speakers. If you can’t hear him on the radio then you’ll find him working at Pirates Adventure the islands number one’ll night out and every now and again he may make an understudy appearance!
Follow him on Twitter @DadTaxi1 & Instagram @dad.taxi or feel free to email him at rprior@globobalear.com