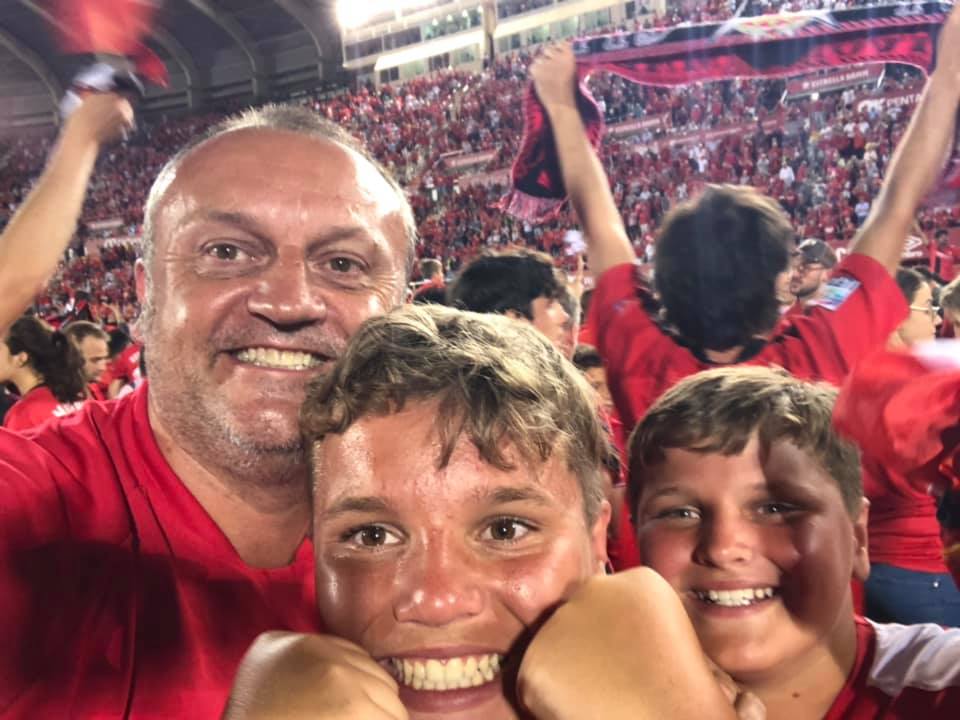 Sunday night was one of those nights where you can say “I was there!”

Now let’s be honest me and my boys have been there through thick and thin with Real Mallorca and having watched some god awful games in recent years we were desperate to get back into the big time. My eldest can just about remember us being there 6 years ago but not my youngest so let’s take a look back.

In 2012/13 Real Mallorca were relegated from La Liga after an impressive 16 years in the top flight. In 2016 after a lot of turmoil, American Robert Sarver bought the club but things at the time didn’t improve.

June 4th 2017, they were relegated to Segunda División Bafter a draw against already relegated Mirandés. The club had spent 36 years between the first and second division so this was a new low point. On the 19th of June they appointed Vincente Moreno as their new coach which was probably their best signing.

On May 27, 2018, Mallorca returned to Segunda División in 2017–18 seasonafter winning against Mirandésin the promotion play-offs. The club was promoted to the second division in the same stadium where it was relegated in the previous season.

And so to Sunday, after a 2-0 loss last Thursday away in Coruña only the most die hard fan were saying or thinking Si se puede(yes we can). I said to my 2 boys that we’ll go down to the ground early to welcome the Mallorca coach to the ground. It took me back to how football used to be when I was growing up. Back then you thought nothing of getting to the ground 2 hours before a game but in this day and age arriving 5 minutes before the start is the norm. My boys were a little reluctant, “why so early Dad?” “What’s the point?” Were 2 of many questions they asked. That was until we arrived on the road to the ground which was packed with supporters singing and dancing. The atmosphere when the team bus arrived was incredible and those players sat on that bus couldn’t help but be inspired.

And inspired they were. 21,210 fans turned the Son Moix into a cauldron and pretty much the whole stadium were dressed in club colours. The first goal came on 21 minutes when Budimir hit a lovely left foot shot from just outside the area, the dream was on. Into the 2nd half and Mallorca kept pressing and looked like it would only be a matter of time before they scored. On 62 minutes they were awarded a free-kick. Salva Sevilla has been known to hit a free kick like David Beckham and sure enough he obliged, rifling into the bottom right corner. 2-2 which meant if Mallorca could survive extra time without conceding they’d be up as they’d finished above Deportivo in the league. They were then saved from conceding an expensive away goal by a terrific stop from Manolo Reina. It felt like everybody had accepted extra time everybody except Abdon Prats. Born in Arta he is the fans favourite especially the Ultras behind the goal. On 82 minutes he picked up the ball midway through the half and kept running towards the goal and about 25 yards out he let rip a screaming left footer which flew past the keeper. Fitting perhaps that a Mallorcan born should hit the winning goal. A tense last few minutes saw Deportivo miss a point blank header right at the end of the game which would have been heartbreaking. At the final whistle there were scenes of complete joy both on the pitch and off it too. Not for long though as those off the pitch ran to get on it including me and my 2 boys. You had to feel a little sorry for Deportivo, their supporters and probably more than most their coach Pep Lluis Marti. Born in Palma he played 316 games for Mallorca and Mallorca B and was a legendary club Captain. I probably think Mallorca was the last team he wanted to face in the play-offs.

Countless memories of a great night culminating in my boys saying “Dad, we’re going to be seeing Messi, Hazard and Griezmann on this pitch next season!” They couldn’t contain their excitement on the way home and went to sleep with their shirts on dreaming of the amazing games to come next season.

Real Mallorca are in La Liga!